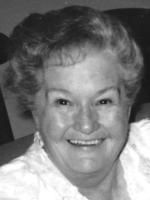 Eulalia Anne Beer Ross, mother, grandmother and our Nana, passed away on September 3, 2010, at her home in Helena, Montana, after a short but courageous battle with lung cancer. She was 85 years old.

Born August 1, 1925, in Denver, Colorado, to Dee and Eulalia Beer, Lalie was a quintessential member of what has been called “The Greatest Generation.” She was a child in the 1930’s depression, high school and college student during WWII, and wife, mother and homemaker from the 1950s until her death.
One of Lalie’s earliest memories was during the depression years when strangers would often come to her parent’s back door asking for food. Lalie remembered that her mother never turned people away without feeding them and at each dinner preparation always made extra portions in case someone was in need who found his way to her door. Lalie never forgot this lesson of kindness to others.

Lalie’s high school and college life, evidenced by a 70-year-old leather bound scrapbook she kept until her death, takes one back to an era almost incomprehensible by today’s standards. The pages are stuffed with yellowing invitations to teas, proms, parties and weekend ski trips to Winter Park, Colorado. Old photos and love letters from many boys who were sweet on her, as well as sorority and newspaper clippings, paint a picture of a young, beautiful girl who was immensely popular and admired for her kindness and sense of humor. Always concerned for others, even 60 years later, Lalie still mourned some of the boys she had known in the 40’s who never came home from WWII.

As a straight-A student at Denver’s Eastside High School, Lalie skipped two grades, graduating at age 16, in the spring of 1941. The following school year she began studies at St. Louis School of Design and Art at Washington University in St Louis, Missouri. While at art school Lalie honed her artistic talents in painting and interior design, skills she continued to exercise for the rest of her life. Many of her family and friends have enjoyed being guests at her beautifully decorated homes or have been the lucky recipients of her incredible paintings and toll painted objects.

After a year at art school, Lalie returned home, enrolling at the University of Colorado in Boulder. While a student there, she met and married the love of her life, a returning vet and WWII fighter pilot, Rodney Dewey Ross. They were married August 31, 1946. That same year they both graduated from university, she as an interior designer and he as a civil engineer, and began the next 50 years of their lives. They made homes in Casper, Wyoming; Vernal, Utah, (23 years); Tempe, Arizona (3 years); Rogers, Arkansas (14 years); and the last 17 years in Helena, Montana. During that time, they raised two sons, Richard and Douglas, established a highly successful business and became beloved members of every community they lived in.

Throughout the 1970s and 80s, Rod and Lalie became devoted grandparents to Wendy Michelle and Shane of Sacramento, CA; Rittichai (“R”) of Honolulu, HI; and Ryan and Rhiannon of Park City, UT. Rod and Lalie were often called “dream grandparents.” While enjoying their grandchildren, it was not unusual to see Rod with a grandchild in a backpack running errands or tossing another grandchild in a pile of leaves. He was always thinking of fun things to do with his grandchildren because he never forgot how to be a kid. Always together, Lalie cooked delicious meals, created a warm and loving home and was ever sympathetic and interested in any grandchild’s concerns or accomplishments. Lalie’s oldest grandchild, Wendy, may have explained it best in a recent card to her grandmother: “You are an amazing grandma and the classiest woman I have ever known.”

In the late 1980s, after spending three magical summers at a friend’s cabin in Red Lodge, Rod and Lalie fell forever in love with Montana and made their home in Helena in 1993. They often commented that they regretted having not discovered Montana sooner.

Her husband Rod preceded Lalie in death, passing in 1996, just six months before their 50th wedding anniversary. She continued to live the rest of her life in Helena, with much love, concern and companionship from her wonderful neighbors and friends. Her sons, Richard and Douglas, daughters-in-law Laurel and Nung and her five grandchildren survive her.

Our Nana will be sorely missed. A private family memorial will be held at a later date. The family suggests memorials to Hospice of St. Peters, 2475 Broadway, Helena, MT 59601. Arrangements are under the care of Retz Funeral Home. To offer a condolence to the family or to share a memory of Lalie, please visit www.retzfuneralhome.com.