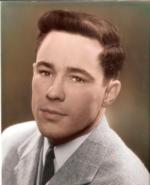 James Raymond Haslip, Jr. passed to the great cabin in heaven on August 8, 2010, after a brief illness.

Jim was born in Helena on November 2, 1933 to James and Ann (Gradishar) Haslip.

During his younger years, he spent a lot of time with his family camping, fishing and hunting. Along with his brothers Bill and Jerry, he was active in sports, especially baseball and track. At Helena High, Jim helped set four school records in the 440 relay, the 880 relay, the mile relay and the medley relay. He anchored the 880 relay team that set a state record in 1951. He played on the Legion all-state team, and he played center field for the East Helena Smelterites.

Jim attended the university in Missoula on a track scholarship from 1951 to 1955, where he continued to run sprints and relays, lettering all four years. After graduating, he was drafted into the army. He spent the next two years as a radio operator in the Communications Section for the 25th AAA Battalion in Kaiserlauten, Germany. Jim was the best Morse code operator in the battalion, and did high speed international transmissions. During this time he made great lifetime friends and had many adventures traveling in Europe.

Right after Jim returned from Germany, he married his college sweetheart Delores in Absarokee. He taught in St. Regis and Absarokee before accepting a teaching job at Helena Junior High and later Helena Senior High, where he taught science and math courses and coached many sports. After he stopped coaching, he continued to shoot the starting gun at races for many years.

During the summers, Jim was a fire spotter and air attack boss for the Forest Service, BLM and DNRC. He was known as the “eye in the sky”, and he was dedicated to keeping the firefighters safe. Had he flown as planned, this would have been his fiftieth year flying the skies of the Helena National Forest, which he knew like the back of his hand. Through his many experiences and observations, he developed very strong opinions about forest management. He was an outspoken advocate for keeping forest roads open and making public lands available for the use and enjoyment of everyone. He also advocated controlled burns, sensible wood harvesting, and generally managing our resources wisely. No one loved the forest more than Jim.

Jim was awarded three National Science Foundation Grants to study for a Master’s Degree. The family spent a year in Texas while Jim went to school at Texas A & M, which turned him into a huge Aggie fan. He was always a huge Grizzly fan as well, but he was a true Montanan and rooted for every Montana team.

Jim was a Ham Radio enthusiast, and he was the state director of RACES for several years. He also assisted in the Race to the Sky, Governor’s Cup, Search and Rescue and the Vigilante Parade.

Most importantly, Jim was a great guy. He had a very sweet relationship with Delores and was the best dad anyone could hope for. He constantly told his children how proud he was of every little project or accomplishment, spent a lot of time with them, and was always patient.

Jim held himself to the highest standards of honesty and ethics. He was a kind, quiet, humble person who made friends easily without regard to age, education, social status or anything else. A lot of people knew Jim but didn’t know his name, because he was the guy who stopped to help change their flat tire or pull their car back on the road. Jim always had a joke ready, and whenever there was a lot of noise and laughing among the grandkids, we usually found Jim right in the middle of it.

Jim is survived by his wife of almost 53 years, Delores (George) Haslip, his two younger brothers Bill and Jerry and their families, and Millie (Haslip) Miller Gregory, his aunt.

Family will be receiving friends from 4:00 p.m. to 6:00 p.m. Thursday, August 12 at Retz Funeral Home. A memorial service will be held on Friday, August 13, 2010 at 10:30 a.m. at Plymouth Congregational Church, 400 South Oakes in Helena. Burial with Military Honors will follow the service at the Montana State Veterans CemeteryIn lieu of flowers, donations may be made to the National Prion Disease (CJD) Pathology Surveillance Center, 2085 Adelbert Rd., Cleveland, Ohio 44106. Arrangements are under the care of Retz Funeral Home. To offer a condolence to Jim’s family or to share a memory of Jim, please visit www.retzfuneralhome.com.