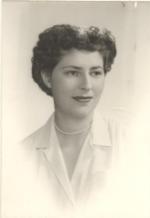 Joan Treacy Holter, age 89 of Helena, passed away Saturday, November 13, 2010 at her residence in Helena.

Joan was born July 24, 1921 in Helena, Montana. She attended Elmira College in New York where she earned her Bachelor of Science degree. After college she went on to work as a Chemist for the Shell Oil Company in Houston, Texas.

Joan married Norman J. Holter on July 18, 1952 in San Francisco, California and they enjoyed 31 years of marriage together before Norm’s passing in 1983. She loved to Hike and Cross Country Skiing along with playing Tennis and a few rounds of Golf.

Joan was an avid community supporter and loved to entertain. She was a member of the Episcopal Church, the Montana Club, Green Meadow Country Club, Montana Historical Society and the Holter Museum. She will be dearly missed by all who knew and loved her.

Joan was preceded in death by her parents; her husband, Norman J. Holter; and a sister, Elizabeth Beyer. She is survived by her children, Anton ‘AJ’ Holter of Seattle, WA, John Holter of Kent, WA, Troy Holter of Helena, MT and Marian Brod of Eugene, OR. She also is survived by four grandchildren.

Per Joan’s wishes, cremation has taken place and formal services and burial will be held at a later date. Memorials in Joan’s name are suggested to the Hospice of St. Peter’s, the Holter Museum, or to the Montana Historical Society. Arrangements are under the care of Retz Funeral Home. To offer a condolence to the family or to share a memory of Joan, please visit www.retzfuneralhome.com.