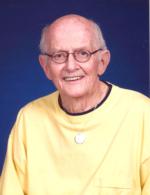 John Patrick Foley, 87, died October 17, 2010 at Fort Harrison Veterans Hospital in Helena, Montana. He was born May 21, 1923 in Laurel, Montana, the sixth of eight children born to his Irish immigrant parents, Daniel and Rose Foley. He graduated from Laurel High School in 1941.

He met and married Rita Cassidy from Clyde Park in 1947, and they had seven children; Jerry, Kathleen, John, Bryan, Barry, Doreen and Mary Ann. They divorced in 1982.

John worked for the Montana Highway Department in Laurel from 1948 to 1962, and then transferred to the Highway Materials Lab in Helena, where he worked until 1970. He left the Highway and moved his family to Fresno, California, where he and Rita owned and operated a chicken take-out and delivery business. After that business closed, he supported himself as a self-employed recycler, collecting and selling cardboard and other recyclable materials he picked up from businesses throughout the greater Fresno area. He also occasionally gave ballroom dance lessons, and was quite the dancer in his later years. He was a member of the Elks Lodge # 193 in Helena and still enjoyed the Friday night dances there until just before he died.

John moved back to Helena in 1997, and established himself in the community as a dedicated volunteer at the VA Hospital at Ft. Harrison. He became visually impaired in his later years, but he did not let that deter him from being an active volunteer. He was recently recognized for his over 4700 hours of volunteer service in the last six years. He was well known on the floors and in the hallways of the hospital, and always had a word or a quip for everyone he knew. John will be greatly missed by all his friends at the VA.

John was preceded in death by his Parents and his brothers Joe, Dan, Leonard, and Leo, and his sisters Mary Jane Morrissette, Rose Ellen Carpenter and Sally Flynn. He is survived by his sister in laws Rosetta Foley of Laurel and Mary Foley also of Laurel. He is also survived by his brother in law Bill Flynn of Anaconda. His surviving children and grandchildren are Jerry Foley of Helena and his sons Ryan (Lori) of Cedar Rapids, IA and Christopher (Heather) of Missoula, MT; Kathy (Jeff) Walter of Missoula and their son Josh (Kelly) of Seattle and daughter Sarah Walter and partner Tim Ehlert of Minneapolis, Minnesota; John (Sandy) of Madera, CA and their daughter Shannon and son Michael; Bryan of Fresno, CA; Barry (Tori) of Fresno and their daughters Megan and Kendra; Doreen Foley of Coarsegold, CA and her daughters Emily and Elizabeth Avina; Mary Ann Foley of Fresno and her son Jimmy and daughter Cassidy Zeiner of Moreno Valley, CA. He is also survived by two great grandchildren, Abigale Rose Cullins of Fresno and Henry Walter Ehlert of Minneapolis, and many nieces and nephews. He will be missed by all.

Viewing and a Rosary service will be held at 7:00 p.m. on Sunday, October 24, 2010 at Retz Funeral Home Chapel with family receiving friends beginning at 6:00 p.m. A Funeral Mass of Christian Burial is scheduled for 12:00 p.m. Monday, October 25, 2010 at the Cathedral of St Helena in Helena, Montana with a reception to follow the Mass in the Brondel Center of the Cathedral. Burial with Military Honors is set for 2:00 p.m. Tuesday, October 26, 2010 in the Foley family plot at the Laurel City Cemetery in Laurel, Montana.

In lieu of flowers, Donations may be made in John’s name to the Fort Harrison Voluntary Services, P.O. Box 167, Ft. Harrison, MT 59636, or to an organization of the donor’s choice. To offer a condolence to the family or to share a memory of John, please visit www.retzfuneralhome.com.