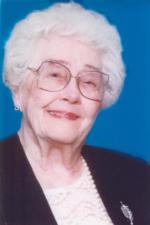 Josie was born December 1, 1912, on the Knapstad family homestead SW of Sawyer, ND, and died a peaceful death in her home with loving family and friends by her side on September 18, 2010.

The second oldest of Andrew and Hazel Knapstad’s nine children, Josie started working early in her life. All of Josie’s eight school years were spent attending the Knapstad School, which was built on 4 acres her father had donated. She excelled in school and passed eighth-grade examinations with excellent marks in all areas. Josie sang in the Glee Club, starred in a school play, and was on the girls’ softball team.

Always wanting to be a nurse, further education was interrupted by her going to work for a family near the Knapstad farm. One of her fondest memories was of earning her first pay and having the lady for whom she worked tell her to go buy a new pair of shoes before she gave the rest of the money to the family. Her love for nice shoes continued; only occasionally in her last few years would she be seen wearing anything other than high heels to church.

Josie married Claude Tannehill in 1931 after which they moved to Minot, ND, where they rented a basement apartment for $7 a month, the cost of which was shared with another married couple. Two years after the birth of their first daughter, Betty, Claude promised to take Josie “where the wind doesn’t blow” and they headed to MT in a 1936 Buick touring car. Josie said she felt like she pushed the car all the way to Montana.
Whether working on her ranches, running a dude ranch, cooking, helping with haying, rodeoing and having two more daughters (Bonnie and Claudia), Josie’s phenomenal work ethic drove her to also waitress at the Davis and Cabin Cafés in Helena.

In 1955 Josie married Howard Greer, owner of the Kozy Motel, Helena, MT. She continued to run and operate the motel a number of years after Howard’s death in 1975. After selling the motel and retiring, Josie moved to Minot, ND, where, at the Nazarene Church, she met Orrin Luchsinger.
Josie and Orrin were married in 1978 and Josie lived in Minot until Orrin’s death in 1984. Josie loved telling about the motor cycle ride she and Orrin took from North Dakota through Glacier Park and back to Minot. After Orrin’s passing, Josie returned to Helena where she continued to live up ‘til the present.

Josie loved to travel and had fond memories of her trip to Europe with sister-in-law Joyce Knapstad, a trip to Norway in 1990 where she visited the original Knapstad homestead, and numerous travels to most of the 50 States. Loving fishing and picking berries, Josie, even in her late 70’s, continued to salmon fish off the Washington Coast and Western Vancouver Island, BC. She would delight other fishermen with blackberries she picked for blackberry pies.
On May 8, 1971, Josie was honored as “Mother of the Year” by Helena Chapter #906, Women of the Moose and was a life-time member. Bowling was another passion of Josie’s; she bowled on many leagues in Helena and Minot and won numerous trophies.

Family and friends were very important to Josie. She had this amazing memory and could recall histories, days, months, and years of birthdays and anniversaries of relatives and friends past and present. She was faithful about sending letters and greetings and mailed about 100 Christmas cards each year.

Josie was industrious and known for her generosity, crocheting, “famous” pumpkin rolls; the week of her death she was crocheting dish cloths, baking zucchini muffins and canning zucchini jam for gifts.
Josie and family extend heartfelt thanks to Hospice of St. Peter’s, Dr. Margaret Stockwell, and all Hospice staff. She would want special acknowledgment extended to her primary Hospice RN, Rick Oberholz. She felt a special bond with him and always looked forward to his frequent visits.

Josie said she owed her longevity to hard work and her strong belief in Jesus Christ. Josie was a long-time member of the Helena Church of the Nazarene. Donations in Josie’s memory may be made to the Helena Church of the Nazarene Missionary Fund, 117 Valley Drive, Helena, MT 59601 and/or Hospice of St. Peter’s, 2475 Broadway, Helena, MT 59601. Arrangements are entrusted to Retz Funeral Home in Helena. To offer a condolence to the family or to share a memory of Josie, please visit www.retzfuneralhome.com.