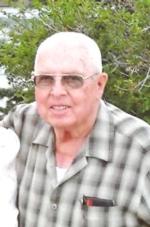 Keith B. (Mick) Hamilton was born on April 13, 1925 on the family ranch in Musselshell, Mont. He was the youngest child of Porter Laverne and Mollie Adolph Hamilton. He died on July 24, 2010 at St. Peter’s Hospital in Helena at the age of 85.

Keith graduated from Missoula High School in 1943. Shortly after graduating, he joined the U.S. Navy and served his country honorably as an Aviation Machinists Mate Third Class on the USS Tulagi. He was very proud to be a WWII Veteran and especially proud to have fought in three major battles during his tour from 1943 to 1946.

After the War, Keith came home and returned to school attending the University of Montana in Missoula and eventually receiving a Teaching Degree from Western Montana College in Dillon, Mont. His first teaching job was in Browning, Mont. He later went on to teach in McGill, Nevada where he met, feel in love and married his wife and partner in life, Alice Zele Hamilton on May 15, 1954. Soon thereafter they moved back to Montana to raise their 3 children where Keith worked for 25 years as an IRS Tax Auditor, retiring in 1985.

Keith enjoyed many years traveling the state, attending garage and estate sales, collecting antiques, and historical memorabilia. And of course, meeting new and interesting people. He was well known within the “Garage Sale” community. He learned at an early age to be kind and helpful to everyone he met. Keith will be dearly missed by his family, his special friends, Dan and Mary Hoyrup of Helena along with many more friends too numerous to mention.

A Graveside Service with Military Honors is scheduled for 11:00 a.m. Friday, July 30, 2010 at the Montana State Veterans Cemetery, Ft. Harrison. A luncheon will follow the service at the Carolina Bed and Breakfast located at 309 N. Ewing across from the old Governor’s Mansion. In lieu of flowers, the family asks that donations be made in Keith’s name to the Lewis and Clark Humane Society or to the Montana Historical Society.

Cremation has taken place under the care of Retz Funeral Home.