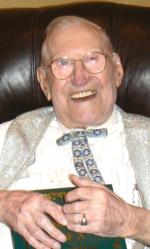 Lloyd Peter Anderson died on October 10, 2010, at the Masonic Home in the Helena Valley where he resided for the past two months. Previous to that he lived at Hunters Pointe for eight years, where he always said “I never had it so good”.

Lloyd was born on August 15, 1912 in Webster, South Dakota, to Hans Peter and Katherine (Egge) Anderson. When he was one, his parents moved to eastern Montana where they homesteaded twelve miles south of Ismay, Montana. He attended the Hay Creek School (with 8 classmates) and then moved closer to Ismay where he graduated from high school in 1932. Following high school he worked on several construction projects in eastern Montana. Lloyd married Margaret Murphy on September 1, 1940, and they bought a farm and ranch at Ismay where they continued farming and ranching until 1956. Following that time he went to work with Schye Co. Inc. building bridges. He was very proud of the fact that “He built bridges in seven states”. He then went to work for the American Smelting and Refining Co. (ASARCO) in East Helena as a boilermaker. He retired from ASARCO in1980.

During their retirement years Lloyd & Margaret enjoyed traveling throughout the western United States with their RV and were Charter Members of the “Treasure State Wheelers”, “Prickly Pear Travelers”, “Big Sky Ramblers”, “Montana Good Sam’s” and the “MT Holiday Ramblers”. He was very active in and held numerous leadership positions in these organizations throughout the years. Lloyd enjoyed, hunting, fishing, welding, and telling stories of “how things used to be” and was well known for his unique sayings and quotes.

Lloyd is preceded in death by his wife Margaret; son Robert; brothers Hans and Clarence; a sister Alice; and his parents. He is survived by his son Jim (Jan) Anderson of Helena; daughter-in-law, Genevieve ‘Babs’ Anderson of California; grandchildren, Jami (Chris) Lynch of Ronan, Kelly (Travis) Elder of Helena and Mike (DeAnna) Anderson of Helena. He was also proud to be called “Grandpa Great” by his great grandchildren: Lauryn, Taylor, Ashleigh, Landon, Kellan, Olivia, Jacob, Lily and Alec. His words of wisdom to them at the end of each visit were “Do the best you can as long as you can”.

Lloyd’s Life will be celebrated with a Memorial Service at the Retz Funeral Home Chapel on Sunday October 17, 2010, at 4:00 PM. Coffee and cookies will be served after the service at Retz. Memorials in Lloyd’s name can be to the “Masonic Home of Montana”, 2010 Masonic Home Rd., Helena, MT 59602 or to the Frontier Home Health and Hospice, 800 Front St., Helena, MT 59601. Cremation has taken place and burial will be in the Custer County Cemetery, at Miles City, MT at a later date. To offer a condolence to the family or to share a memory of Lloyd, please visit www.retzfuneralhome.com.