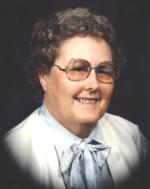 Mary passed away in the early evening hours of November 4th, 2010 at the Masonic Home. Her passing was very peaceful on her journey to be with her heavenly family. She has been asking as to when she would see her mother and father as well as her husband Ray and daughter Charlotte.

Mary was born in Plattsmouth, Nebraska, on February 2, 1919 to John W. Chapman and Ruth E. Chapman. Mary had three brothers and no sister’s. She was born at her Grandparents home (Judge Samuel M. Chapmen and Ruth M. Chapman of that city. John & Ruth had just relocated to Willard Montana, near the Montana and South Dakota border. Mary’s childhood year were spent in Willard, St. Ignatius, Montana and Prosser, Washington where she graduated from High School at Prosser High. Her graduation was in spring 1938. She attended the University of Washington for one year before her marriage.

Mary and Ray E. Davis were joined in marriage on October 2, 1940 in Goldendale, Washington. Mary and Ray had three children, Donald, Charlotte, and John. Ray was a farmer and logger in Oregon’s Willamette Valley. They celebrated their 50th year of marriage in 1990. Ray passed away 1996.

Mary worked for Oregon Mutual Insurance form 1964 to 1973. Before working at OMI Mary worked at various Retirement Home in the McMinnville area. Mary loved the outdoors with her flower, garden and fruit and nut orchards. Mary was a long time member of McCabe Method Church, UMW women, and Knowles Eastern Star (1966) of McMinnville, Ore. One of her great joys was fall hunting season, as her house was the gathering spot for several families and friends of hunter. The adventure story would abound.
In 1990 Mary and Ray moved to Montana to be nearer her two sons and there families. It was not long after their moving when that Ray started having some Health issues which required a full time care provider. Mary helped out at the State of Montana Blind Library in Helena. She re-winded talking books and placed them ready to be sent out to seeing impaired. In 1994 Mary move into the Masonic Home, North of Helena. She contained working a few hours each week at the Library. Mary was always thankful for her Masonic Home family, which gave her outstanding health care with that loving family setting. The staff became her adopted loving family. Her stay was for seventeen years in this wonderful environment.

Mary was preceded in death by her father John and mother Ruth, as well as her daughter Charlotte. Her brothers Samuel his wife Helen, brother John Jay, who lived in Great Falls, Montana and Prosser, Washington respective. Also the passing was her brother Dan’s wife, Dorothy of Seattle, Washington

A “Celebration of Life” service will be held at the Montana Masonic Home, 2010 Masonic Home Road, Helena, Montana on Saturday, November 13th at 2:00 PM. A desert will be served after the celebration. In lieu of flowers donations may be made in the name of Mary Davis to the Masonic Home of Montana. Arrangements are under the care of Retz Funeral Home. To offer a condolence to the family or to share a memory of Mary, please visit www.retzfuneralhome.com.