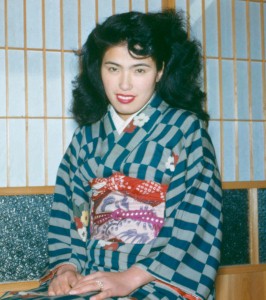 Miyuki Uchimura Hickman was born on August 1, 1929 to Kifu and Yukiguma Uchimura in the city of Kumamoto, Kyushu, Japan.

William (Bill) Charles Hickman met Miyuki in 1952 while stationed in Japan as a member of the United States Army. During his service in Japan, Bill courted Miyuki by meeting her family and seeing the beautiful town and countryside that she grew up in. The courtship was filled with notable moments but two moments stand out. Bill had checked out an Army Jeep to go out to the countryside with the locals to collect charcoal. He had permission from his commander to bring Miyuki along for the ride. Bill told Miyuki that they were going for ride but she did not want to go. While the locals were collecting charcoal, Miyuki and Bill went for a ride in the country. Bill proceeded to drive the Jeep into a hole which bounced Miyuki out of her seat and she landed on top of Bill. The hole was on a former training range that still had unexploded rounds. The locals helped get the Jeep out of the hole and Miyuki was not very happy with Bill. The other was a romantic boat ride that ended with a stranded boat. Miyuki just shook her head and laughed when those memories came to mind.

In early 1953, Bill went back to the States and then returned to Japan as a civilian. Miyuki and Bill were married at the American Consulate in Fukuoka, Japan on June 22, 1953.

Just as she lived her entire life, Miyuki embraced her new life in a different culture with kindness and generosity and an open heart and open mind.

Miyuki studied hard to learn about her new home and became a naturalized citizen on July 18, 1969.

Throughout her life, Miyuki touched people with her kindness and warmth. She made life long friends wherever she went.

Miyuki was an experienced and talented seamstress and enjoyed gathering with her friends in their sewing club. She and Bill also enjoyed gardening. Her granddaughter Lindsay so treasures the time with her grandma and grandpa in their garden, that she planted a garden so that her two boys could experience the same joy.

Miyuki is survived by her beloved husband of 67 years, Bill, her two children Cecelia and Clay, her granddaughter Lindsay Trent, Lindsay’s husband Clarence Trent and her two great grandsons, Zakai and Kiyan.