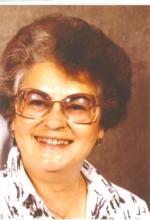 Vlusta S. Quickenden Dotson, known as “Peggy,” was born to John and Mary Siroky on November 1, 1918 in Roy, Montana. A cancer survivor, she passed away on July 25, 2010 at the age of 91, following an extended battle with a second form of cancer.

Peggy spent her first 18 years alternately attending school in Roy and working on the homestead established by her parents. At age 18 she attended “Beauty College” in Denver and returned to Lewistown, MT where she was employed as a hair dresser. She met and married Charles T. Quickenden in Lewistown in 1938 and, with him, had three children.

They moved to Great Falls in 1943 where Charles worked as a fireman at Malmstrom AFB and she established a beauty shop which she successfully operated for 40 years. While in Great Falls, they enjoyed square dancing, bridge and outdoor activities. Peggy was especially proud of her flower garden and her children’s successes. Charles passed away in 1983 after 45 years of marriage.

While at a school reunion in Roy, she met Daniel Steven Dotson, whom she had known in her teenage years. She and “Steve”, who had also raised three children and lost his wife, were married in 1987. Together they spent their summers in Great Falls and winters in Hemet, CA. They enjoyed travel, including trips to China, Korea, and Hawaii. They also played cards and golfed. She was thrilled to get a hole-in-one when she was 79. Steve died in 1998.

In 2001, Peggy moved into The Waterford in Helena in order to be close to her eldest son. While there, she made many friends and enjoyed bridge, reading and frequent visits or phone calls from family members.
Vlusta/Peggy was preceded in death by her parents; both husbands; 6 brothers; and 3 sisters. She is survived by sisters, Abbie Abell of Billings and Josephine Winters of San Jose, CA.

Cremation has taken place under the care of Retz Funeral Home. Memorial services are pending. In lieu of flowers, the family suggests contributions to the Hospice of St. Peter’s, 2475 Broadway, Helena, MT 59601, which was especially helpful in attending to Peggy’s final struggle.